At the Edge of the Orchard, 2017, Archival Digital Print

A Chapter about Place is my working title for the new photographs some of which are now on view in Cleveland, Ohio, at Tregoning & Company.  The photos include some of those created when I arrived in the Hudson Valley in Mid-August 2015.  It was my return to place and the extended search for a home after I had lost my loft in the Garment District in Manhattan, that these began.  The following May, 2016, I moved onto my new homestead near where I had temporarily rented and the photos continued with an awareness that had become increasingly present in my consciousness of the challenge photography gives to ideas of date, time and place in the past.

I am keenly aware that in the photographic print, the viewer is aware that he is in the photo’s future. Even Breaking News shots soon seem stale.  In the image’s future we know what happened, we look back always, aware that Aunt Harriet left her philandering husband she’s smiled at in the print or that this church that seemed fused with stillness in the small photo was destroyed in a bombing of a war yet unknown in its future.  We have an advantage which is always brought to the looking.  Of course the present can’t be held or contained as time slips through us in a ribbon of experience but our awareness of it, in photographs, is unique to the medium I think.  This position, which the late critic John Berger comments about so eloquently, has gnawed at me for as long as I’ve been thinking about the potentialities of photography and its place in art.  It reduces the medium to something that is a signifier of the past, perhaps immediate past, but consciously historical and therefore documentary.  Painting doesn’t do this.  Not in the same way.  The freshness of a painting, if successful, does not shout its time in the way most photographs do.  Even though there are obvious cues of period, the timelessness of a painting is ultimately what is most revered.  Parenthetically, this may have to do with two things:  that anyone can hit a button and produce something; and, the elevation of the vapid in the snapshot frenzy, a craze of the last ten years that has made any photo valuable because of the eye of the curator who positions and titles it, sometimes sardonically, to play off the amateur photographers naiveté, and by applying context imposes meaning that was never intended.  But, that is far more about selection, the curator’s will imposed to millions of choices now on the internet, than generation from the photographer’s eye.

So I wanted to address the problem of a more original innocence, some of the surprise I imagine those 19th c. French photographers felt when they saw an image come to life and beheld nature and objects merge out of the chemical soup.  I wanted  to let the camera find the germ of timelessness.

I will write more on this as I have thoughts but I welcome your comments and ideas. 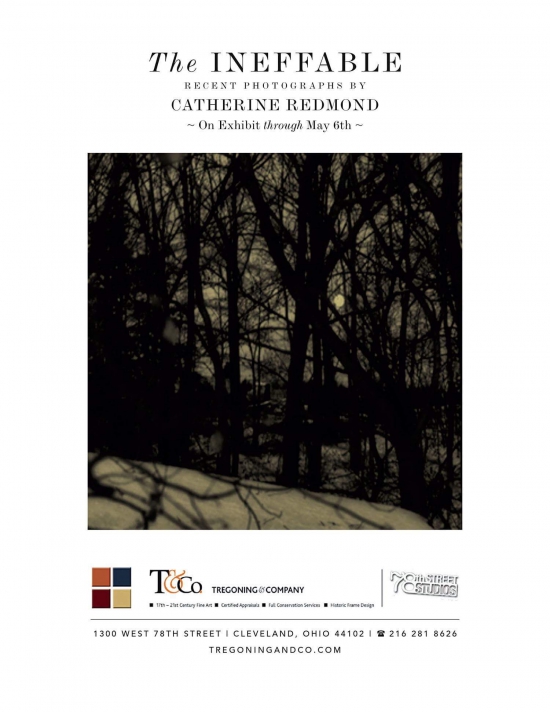 A show of photos opened today at Tregoning & Company in Cleveland. Thoughtfully curated by Bill Tregoning and Laura Sherman, it exhibits some of my photographs taken over the last two years as I let the land be my muse.  Given that Earth Day is not far away, it feels fitting to have these on view now.

Photography is a area of continued conversation and discussion and engagement for me so my ideas about its power, it’s limits and its potential within a structure continue to be engaging.