All holidays bring reflection if one has lived more than 24 months. The more times around the Sun the deeper the layers of memory. The pleasure of memory is one of the bonuses of a life.  Today I reflect on all the Thanksgivings I have enjoyed, cooked, been a guest at or the hostess. It is my favorite holiday of all.

This morning I pull together a few things that come to mind in the quiet of the studio, the shades still down, the critters still in their dreams and only a cup of French Roast with me.

On the left some very bad mice steal a turkey, maybe a chicken, but whichever fowl is involved, the mice understand community effort and sharing.  To think that these moving screen rodents were in the world in 1919, almost 100 years ago, tells us how connected we are to the basics of vision, humor and the conditions of living with other beings.  Time and technology have had no effect on these bad mice who remain as legible and good to look at as a century ago.  I admire the composition of these frames.  Spare and remarkable.  We are only told enough and in a way that is aesthetically appealing to move the story.  As we know, rodents hitch rides on sailing vessels — this is my awkward transition to another disjointed memory.

I have with a beloved close friend from undergraduate days.  The last time we had lunch she told me, casually, as if she were asking for a piece of celery, that her many times great grandfather had been on board the Mayflower.  In all the hours we have spent together never once had she told me that.  He was an interesting character and had already been to the New World going to the Jamestown Colony when he was shipwrecked.  Returning to England, he tried again and his second trip was on The Mayflower.

I don’t believe I am as communal as the mice or as brave as that Mayflower passenger.  But here, now, we are able to relish in our imaginations what it might have been like had we created and drawn Felix the Cat or booked passage to come to the New World.  The joke on us of course is that every single day we do book passage to the New World.  It is waiting for us in the next sentence we write, line we draw or smudge of color we put down in the next minute of our future. 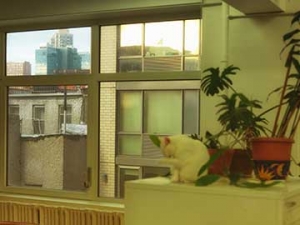 We all remember where we were when whatever it was that was before was changed into a consciousness that we had been innocent but now it was lost. Each generation has that moment. For us it was that day in Dallas.

Almost as soon as I posted the comment about the storm in Chicago I received an email from artist Douglas Lucak in Cleveland telling me that the weather in Chicago was moving west toward Cleveland. He included a photo from his kitchen window as the tumult approached.

Douglas is a widely collected photographer who shows at The Bonfoey Company. You can find his original work just by doing a google image search.

All this underscores again how connected we have become and how events are personally communicated in real time now. Of course this changes our perception of time but it also effects our sense of place. Where are we anyway now?

Soon to be published an artist’s book of cut papers with color and a show of recent work at the Elizabeth V. Sullivan Gallery in Sparkill, NY.

It is so dark so soon now. My friend in Chicago tells me that she is in the basement of the Art Institute awaiting a tornado. Here it is quiet and overcast but not dangerous. No portent of disaster.

I was up at six a.m. to catch the light as the moon shadowed over the sun.  That the eclipse coincided with a favorite day of mine, The Return to Standard Time, I expected a unique light. Maybe even zombies with this conjunction.  Living on the west side of Manhattan, where the sun goes to bed, positioned me poorly for a rising occluded sun.   This is looking East from 8th Avenue and 35th Street. No one was on the street save a few morning workers.  No zombies.   It is buildings, machinery, the working side of commerce and the underbelly of the tourist industry.

Halloween happened and now it’s All Saints Day and moving toward the Return to Standard Time on Sunday morning and onto Veteran’s Day ticking to Thanksgiving.  The wheels of the calendar move on quietly, turning without friction, on and around, over and over.  The reassurance of the Earth’s seasons that these dates represent was embedded into our throbbing hearts from the very beginning.