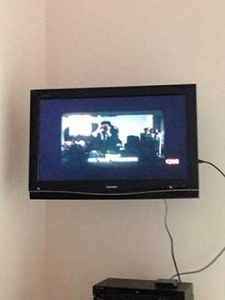 Tonight CNN airs a special on Watergate and Nixon.  I follow these new views and additional documentation since it is a time that is inextricably tied in my mind to my studio.

It was a hot summer.  I was living on the Upper West Side with a studio that had taken over the bedroom.  The bed was pushed into the corner so my equipment would have enough room.  I had used the dining area of our kitchen prior.  The bedroom was spacious in comparison.  It was a west light, not great, but a double window.  I recall the largish (36″ x 40″? 40″ x 50″?) still life I worked on during those hearings.  It was a table setting with a yellow drape running across a white tablecloth and a plate, silverware and some playing cards.  I had a terrible time bringing light into it though it had titantic weight, every form heavy, even the cards.  I struggled with values and chroma, stroke by stroke as I listened to John Dean, John Erlichman and especially Alexander Butterfield testify.  I remember the moment that Sam Dash asked Butterfield about the taping system.  I put down the brush and turned to stare at the radio.

On the Upper West Side, some stores put televisions out on the street so people could clot around and watch the news.  Nixon went onto resign and 20 years later my painting, along with all my early work in storage, was lost when I couldn’t afford the fee.  Some of these survived and have wound up in collections.   If my still life is intact and looking at someone, I hope it still gives off the vibe I felt at that momentous time.