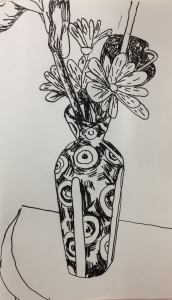 The act of drawing is both intensely focused and calmly meditative.  Drawing is the one creative act that is always available no matter where you are or what tools you have.  An extension of the finger, a drawing is the most primal of all first utterances of the soul. The thought before it is a thought, it expresses an idea before  it is even formed into language.

Curious to me is the over-worked term, mark making, which is favored in almost every sentence where drawing is included  in academic programs.  It seems meaningless for its vague generality and imprecision at the same time it alludes to some primal hitting of one  rock against another to make a mark which either forms something, a tool, an axe, or says simply, “I’m here!” as early man might have done.   Although I haven’t researched it, it would be my bet that the term rose in use at the time that art school drawing standards which had included surface anatomy and accurate rendering of the seen world, was being replaced by the unfortunate term “creative” drawing programs which were anything but creative and required no similarity to reference as current critical ideas were gaining traction in colleges and university programs.

Admittedly it is a particular bugaboo of mine — I have started to count the number of times it is used in crits and surveys — when one can reach more closely to describe what is happening in a drawing.  I see these placid drawings described as mark making where there isn’t even a distant echo of the intensity or necessity that the neanderthal’s mark attained.  Words do matter and especially when trying to describe a practice so essential to the nature of an art.